Colorfull one is better.
Haut

Mark Twain a écrit :A Plan for the Improvement of English Spelling

For example, in Year 1 that useless letter "c" would be dropped to be replased either by "k" or "s", and likewise "x" would no longer be part of the alphabet. The only kase in which "c" would be retained would be the "ch" formation, which will be dealt with later. Year 2 might reform "w" spelling, so that "which" and "one" would take the same konsonant, wile Year 3 might well abolish "y" replasing it with "i" and Iear 4 might fiks the "g/j" anomali wonse and for all.
Jenerally, then, the improvement would kontinue iear bai iear with Iear 5 doing awai with useless double konsonants, and Iears 6-12 or so modifaiing vowlz and the rimeining voist and unvoist konsonants. Bai Iear 15 or sou, it wud fainali bi posibl tu meik ius ov thi ridandant letez "c", "y" and "x" -- bai now jast a memori in the maindz ov ould doderez -- tu riplais "ch", "sh", and "th" rispektivli.
Fainali, xen, aafte sam 20 iers ov orxogrefkl riform, wi wud hev a lojikl, kohirnt speling in ius xrewawt xe Ingliy-spiking werld.

The color one is better
Haut

Thank you guys, I also prefer la version couleur but the reason I asked was because I was thinking in terms of playability: seeing more of the level or less.

The graphics for the monochrome version actually are not those I have shown, the ones I uploaded are the same as the colour version but without the attributes. Below you can see the gfx I prepared for the mono version, not THAT different but I feel they look a bit better(this gfx will be used in the zx spectrum 48k version). 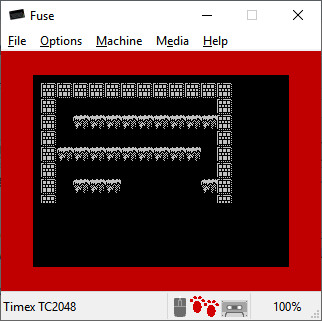 Regarding the colours it is a really a pain that the Mo5 palette has little contrast I wish there were more dark colours to play with.

I have also a preliminary version for the Hector:


I will now more or less freeze all the versions and I will advance the game on the my main versions, the TO8 and C64. Today I am starting to add the protagonist and his movement.
Haut

I have also a preliminary version for the Hector:

I also prefer the colour one.

I have added the movement of the player but I need to work on the animation, perhaps add more frames.
I never seem to be able to record the game at the right frame rate. On the computer/emulator it is much smoother, here it is going twice as fast and choppier.

The character is cute